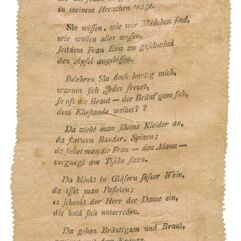 310030 Maker: Unknown. Karoline and Susette von Wölkern send their granddad a celebratory poem on the occasion of the marriage of their uncle with Fräulein von Welser in Ulm on May 31, 1791. With vignettes at top and bottom. Type & woodcut. 490x88 mm. Backs: Plain. 1791.

Ludwig Christoph Carl Leopold von Wölckern (1762-1853), Mayor of Ulm in the kingdom of Württemberg, married Ursula Albrecht Ludwig von Welser (died 1814) on May 31, 1791. In their poem his nieces mention the balloonist Jean-Pierre Blanchard (1753-1809): Oh! If only Monsieur Blanchard could lend me his airship, I would fly from here [probably Kalchreuth near Nürnberg] to Ulm at once... Blanchard’s first ride in his gas balloon took place in Paris in 1784, it was followed from 1785 on by several shows, also in Germany (Frankfurt/M., Hamburg, Nürnberg...)