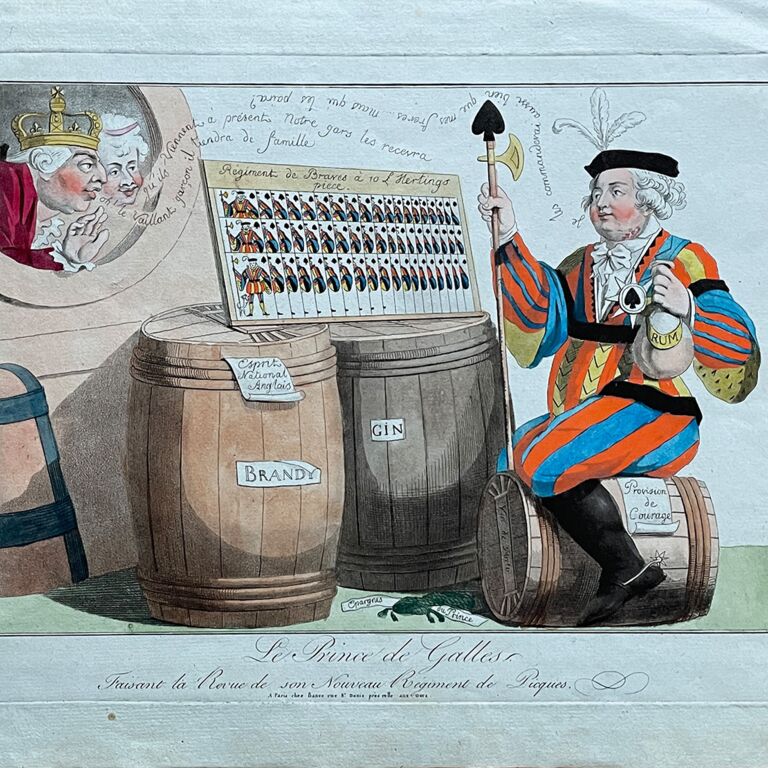 The sheet is signed: „A Paris chez Bance rue St. Denis près celle aux Ours“. The engraver and publisher J.-L. Bance, called „Bance aîné“ (Bance the Elder, 1761-1847), resided there around 1800-1805. Satirical sheet showing the Prince of Wales, later George IV, as a chubby young man in a colorful costume. He holds a halberd in his right hand and a flask of rum in his left, with his regiment of Jacks of Spades standing at attention in front of him. His father, King George III, and his mother, Queen Charlotte, encourage him from the left. Background: In 1803, Bonaparte had a large army camp set up at Boulogne-sur-Mer in preparation for the invasion of England. The Prince of Wales was known as an easy going man, holding a then already antiquated weapon, an allusion to the British sergeants‘ pike, and commanding an army of paper soldiers.

We try to reduce the use to a minimum and only use necessary and systemically relevant cookies.

Cookies in this category are required for the basic functions of the website. They serve to ensure safe and proper use. Therefore, this option cannot be rejected.