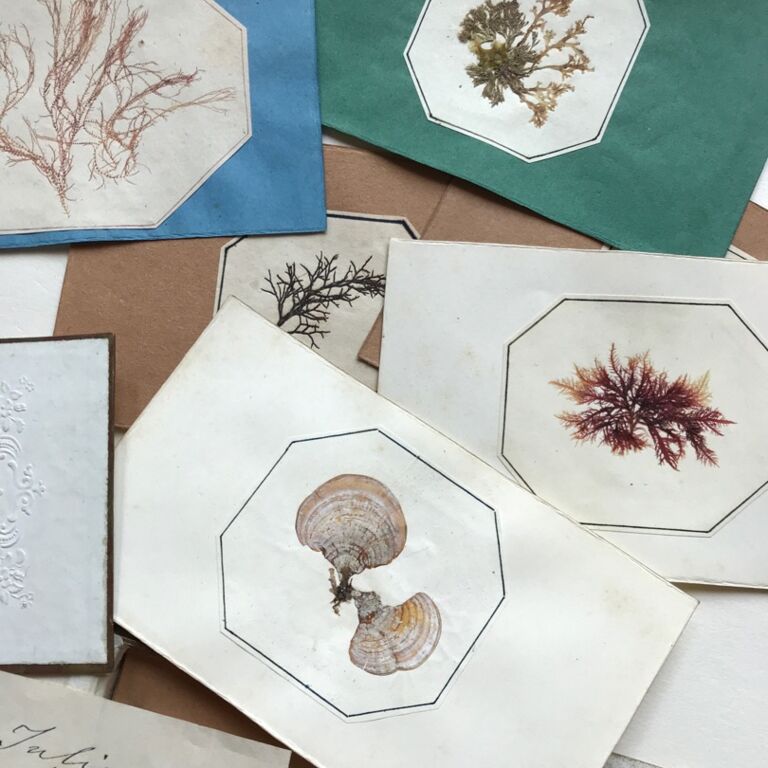 310302 ALBUMS AND AUTOGRAPH CASES Leop. Forster. Autograph case, decorated with motives in gold & inscribed ALBUM. Inside: 1 illustrated cardboard sheet (party of friends playing music in the countryside), 1 leaflet, 1 leaf with a handwritten dedication by Leop. Forster, dated Castelnuovo 1. Juni 1858, & 28 leaves displaying mosses gathered in the harbor of Piraeus in Greece (handwritten note, in German). Hand-col. lith. (cover leaf). 91x148 mm (case), 79x135 mm (leaves). Backs: Plain. 1858.
We know of a Leopold Forster in the field of natural science, who could possibly be the author of our album: he was a doctor & veterinarian in Prague (1824 - after 1892) & became a professor (1859) & director (1879) of the k.k. military veterinary institute. Provided that is the same person, he also contributed to botany: a „Forster M. C. Leopold, in Prag“ is listed in the „Verzeichnis der in Oesterreich lebenden Botaniker“ (Register of the botanists living in Austria, 1852). Piraeus is the harbor of Athens & there are so far 2 Castelnuovo, one in Istria near Rijeka, the other in Dalmatia next to Cattaro: both belonged by that time to the Austrian empire. The alge have been neatly pressed onto small paper octagons, which were in turn pasted on the original album’s leaves. They have retained over the years the whole charm of their colorful delicateness.
The upper cover of the case new attached, case slightly rubbed, inside almost intact.